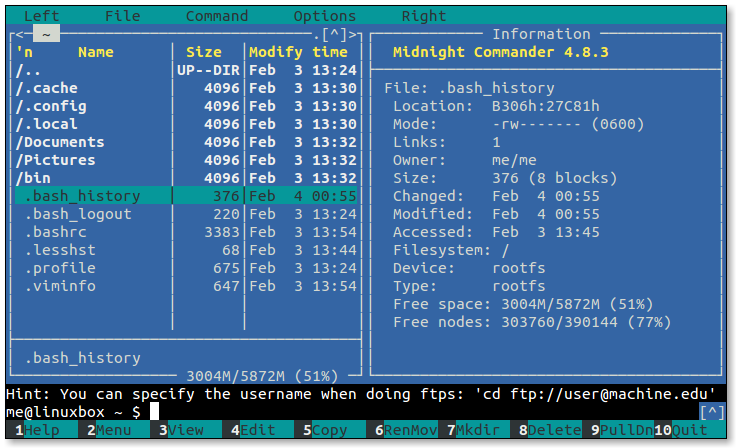 Midnight Commander is a free cross-platform orthodox file manager. It was coded by Miguel de Icaza in 1994 in a style of the then-popular Norton Commander, DOS Navigator, and other panel file managers.

In this adventure we will look at Midnight Commander, a character-based directory browser and file manager that bridges the two worlds of the familiar graphical file manager and the common command line tools.

The design of Midnight Commander is based on a common concept in file managers: dual directory panes where the listings of two directories are shown at the same time.

Either can list directory contents, show a plain text preview, file details, or a directory tree (see Directory Tree). File operations are accessible through the function keys or the mouse. More options are visible in a dynamic user menu (F2) and option menu (F9). Keys above F12 (F13 up to F20) are accessible through Shift. Menu and dialog options have one letter highlighted – pressing this letter (or Alt+Letter inside a text entry) directly activates the respective option.

Midnight Commander is quite powerful and boasts an extensive set of features:

Before we start performing file operations, it’s important to learn how to use the directory panels and navigate the file system.

As we can see, there are two directory panels, the left panel and the right panel. At any one time, one of the panels is active and is called the current panel. The other panel is conveniently called the other panel in the Midnight Commander documentation.

The current panel can be identified by the highlighted bar in the directory listing, which can be moved up and down with the arrow keys, PgUp, PgDn, etc. Any file or directory which is highlighted is said to be selected.

Select a directory and press Enter. The current directory panel will change to the selected directory. Highlighting the topmost item in the listing selects the parent directory. It is also possible to change directories directly on the command line below the directory panels. To do so, simply enter cd followed by a path name as usual.